People living at Dewar Close invited the Mayor of Rugby to their Bilton home to help launch a new social space for residents, friends, and family, called ‘Buddies Bungalow’.

Pearl, who lives at Dewar Close, was joined by Cllr Tom Mahoney to cut the ribbon and officially open the converted bungalow - located within the grounds of the Beech Drive home - which now includes a new café, activity rooms, a relaxing lounge area, and ‘secret garden’ which she’s created.

It also features a therapy table tennis table, developed by the BAT Foundation, which includes side panels to increase spatial awareness, create a secure, non-distracting and comforting play zone, and help ensure the ball remains in play for longer, meaning anyone can have a go, regardless of ability.

The table tennis table at Buddies Bungalow was funded by a donation of over £1,500 from Coventry print and branding company Graphic Arts Group as part of its annual charity payback scheme, which has raised more than £5,000 for WCS Care over the years.

Residents invited friends and family to try out the new facilities as part of the celebrations and join them for coffee and cakes. 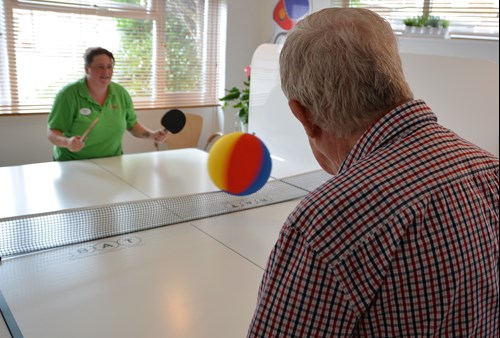 Trish Hanlon, Home Manager at Dewar Close, said: ‘It’s been a few months in the making but we’re delighted to launch Buddies Bungalow, which is going to be a fantastic addition for people living at Dewar Close, as well as for visiting friends, family and community groups.

‘We’ve been able to create more spaces for people to enjoy what they’ve always done like knitting, painting and jigsaws, as well as plenty of opportunities to try new things such as table tennis, alongside a bustling café where loved ones can simply enjoy a coffee and a natter together.

‘The bungalow complements our range of existing facilities and activities that include a pamper salon, side-by-side bike-for-two and cycle track in our lovely garden, and regular Out & About trips to local attractions and places of interest.’

Christine Asbury, WCS Care’s Chief Executive, said: ‘With a bit of imagination, we’ve turned a disused building into a lovely social space that people will be able to enjoy for years to come.

‘As a charity, we’re always trying to find new ways of pushing innovation and creativity in care, and Buddies Bungalow is just one example of how we work towards our ambition of making every day well lived for residents.’