Veteran George Mead is presented with the Legion d’honneur at Stratford Town Hall by Robert Mille, Honorary Consul for France.

A 92-year-old war veteran from Stratford-upon-Avon has received France’s highest decoration for his role in the D-Day Landings during the Second World War.

George Mead, who lives at The Limes care home on Alcester Road, was presented with the Legion d’honneur medal – the highest order for military efforts – by Robert Mille, Honorary Consul for France, during a ceremony at Stratford Town Hall last week (Wednesday 18 January).

As he arrived, George was given a hero’s welcome from friends and family, some of whom had travelled thousands of miles from Canada to mark the occasion. George said: ‘It’s an immensely proud day for me and I am delighted that I have so many friends and family here to share this experience with me.’ 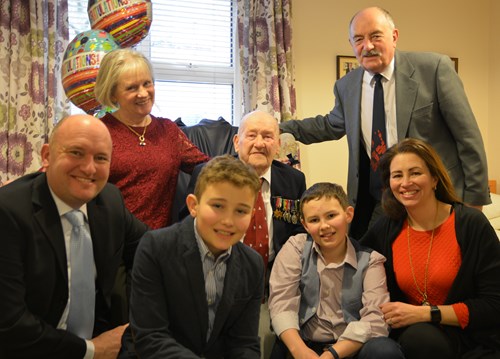 Mr Mead was among more than 156,000 British, American, and Canadian troops, marines, airmen and naval personnel who landed on the beaches of Normandy on 06 June 1944 – described as one of the most memorable wartime operations ever planned and executed. George first joined the army serving in the Royal Artillery Regiment. On the approach to and during the preparation for D-Day, he was transferred to the Oxfordshire and Buckinghamshire (Ox and Bucks) Regiment, 1st Bucks.

After training and preparation, he joined thousands of other servicemen for the crossing on 5th June 1944, and was part of the first wave to go ashore the next day, landing on Sword Beach.

Along with his regiment, he fought his way up the beach, having been sent ashore with five days of ammunition and three days of food.

Together with the men who’d survived the beach assault, he continued fighting into nearby villages, before getting badly wounded and having to return to England to recover from his injuries. He was later sent to Palestine to join the war effort there.

George’s daughter Kate Himmens said: ‘My dad is a very humble man and hasn’t told us a lot about what he experienced during the war.

‘We do know that not a day goes by where he doesn’t think about his friends who died on that day and subsequent days.’

George returned to Normandy with his family for the 50th and 60th anniversaries of D-Day, and took part in the medal presentations in France.

During the 70th anniversary of the D-Day landings, French President Francois Hollande announced the Legion d’honneur would be awarded to all British veterans who fought in France between 1944 and 1945.

As the 73rd anniversary approaches, Kate explained what this honour means to George and his family, and said: ‘We are all immensely proud of my dad and it’s been a very emotional day for all of us.

‘It means a great deal to my dad – and rightly so – but it’s tinged with a little sadness for him because his friends aren’t alongside him to receive their recognition too.’ 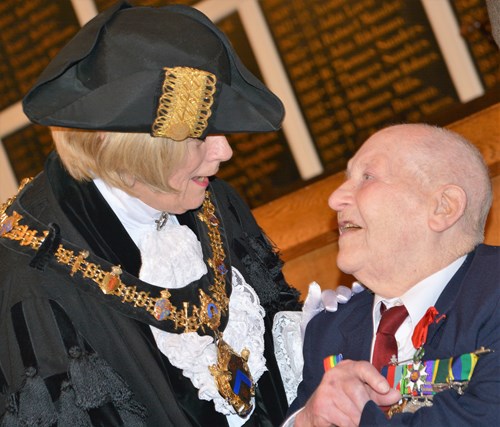