Stratford's bustling town centre might not seem the ideal place for wildlife - but these pictures prove there's still enough nooks and crannies not just for birds and squirrels, but also for small deer.

The photos were taken by Harry Sowden, a resident of The Limes care home just off Alcester Road opposite the Rother House Medical Centre. All the animals were spotted near where the former NHS nurse now grows vegetables. They were taken with Harry's 'point and shoot' camera over the course of several months - requiring not just patience, but also a steady hand.

Harry said: "I was given a bird-feeder as a gift by my family and have been making good use of it, keeping it stocked-up and in the perfect place to attract local wildlife. I was most surprised, however, when I spotted a small deer - I quickly grabbed my camera, turned it on and took a picture just before it darted off.

"I've heard they're notoriously hard to photograph, and having seen how shy they are and quick they move, I'm not surprised!" 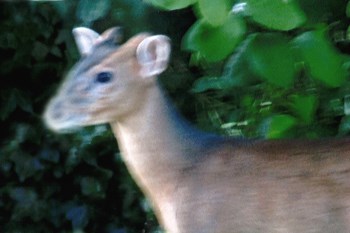 Coronavirus - reducing the risk of illness in our homes